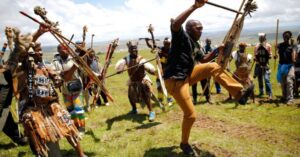 Maskandi is one of the evolving genres of music in South Africa. In popularity, maskandi might lack the appeal of gqom and amapiano, but it is an important genre nonetheless, with roots dating back many years.

Maskandi is a form of Zulu folk music played by artistes who are not necessarily itinerant. You might call them minstrels anyway. Because the genre has yet to receive massive following, some artistes have elected to walk the popular paths, which gleam with the signs gqom, hip hop and amapiano.

Maskandi has got dedicated artistes, however – men and women who are sticking to the genre and flying its flag, although support might not be massive.

In this post, we are going to introduce you to some of these artistes, as well as the impact they have made in the industry. The maskandi artistes are listed in no particular order.

Right here is one of the finest voices in the world of maskandi music. In fact, any list of maskandi artistes that leaves out his name will not fly – certainly not in South Africa, where Khuzani has electrified a whole nation with his songs.

Known simply as Khuzani, this artiste was justly crowned the king o

Maskandi at the Impucuzeko Maskandi Festival in 2017. It may have been three years since his crowning, but a king is always a king, and Khuzani has not depreciated in musical value, nor has he stopped singing.

The muso has got many songs to his name. A couple of them are pretty famous. Think of “Elika Kbuba,” “Ngikhule Kanzima” and “Isilingo.” You are welcome to add to the list, of course.

Ntencane is another sterling voice in the world of maskandi music. He might feature among the youngest in the genre, but he has got a voice worth hearing, and we are confident you are to love his oeuvre.

The muso has got many songs to his name, but the best of him are probably in his recent compilation, “Uboya Enkomeni” album. That body of work should make a fine addition to your playlist.

Here, if you please, is another outstanding voice in the universe of maskandi music. To better understand Igcokama Elisha’s appeal as a maskandi artiste, you may want to look at his history.

He is one of the go-to artistes to musicians of other genres desirous of adding maskandi flavour to their songs. The singer Vusi Nova’s song “Wena Ukhalelani,” which features Igcokama Elisha, is not one to be forgotten in a hurry.

Mzukulu is another significant voice in the world of maskandi music in South Africa, a voice we so love hearing and are confident you will love, too.

Signed to Universal Music Pty, Mzukulu has got a voice that is at once magical and liberating. You should have this voice on your playlist.

Inkosi Yamagcokama’s impact on the maskandi scene is such that any list of maskandi artistes that omits his name will provoke cackles of mirth. His song “Dear Diary” is a national favourite

Unjoko is one maskandi artiste in whom we are well pleased. He is art personified – his songs so to speak. He’s worked with other important voices in the maskandi genre, including Mzukulu and Khuzani.

She may have died in 2010, but Busi Mhlongo’s legacy isn’t stuttering. Not at all. She’s made a significant impact, and it’s there for all to see.

Bonakele is another fine artiste in Mzansi’s maskandi world. The songstress has treated us to several sterling tunes, including “Ngiyamemeza.”

48-year-old Thokozani Langa of KZN has given us some outstanding maskandi tunes and deserves a place on this list.

Shwi Notemkhala is a maskandi music duo and one of the most significant maskandi groups out there. They are not on our list by accident.

By the way, you may want to add to this list, or make yours, in the comment section.