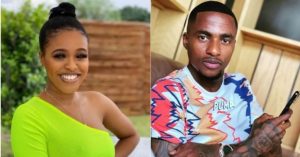 The romance between Natasha Thahane and Thembinkosi Lorch is said to have ended in tears. On Instagram, the actress and the soccer player have even unfollowed one other.

Note: The actress and her soccer player confirmed to the fans that they’re dating when she recently (22 July) send him well-wishes on his birthday on Instagram.

May God continue to protect and guide you all the days of your life.

Wishing you many more years of happiness, love, peace, and full access to heaven’s resources.

I admire and respect who you are.

Lorch’s poor performance at the Carling Black Label Cup was put on him just a few days ago (1 August), and the pair was back in the news.

Orlando Pirates fans were inconsolable after their club lost by one point to all-time rivals Kaizer Chiefs, and they blamed Thahane for the defeat.

Thahane responded to the allegations with a TikTok video on her Instagram.

The actress is shown in the video re-enacting a classroom scene in which she plays a teacher who is dissatisfied with her students’ performance.

Thahane is a big admirer of the Orlando Pirates and has been tweeting about them for a long time.