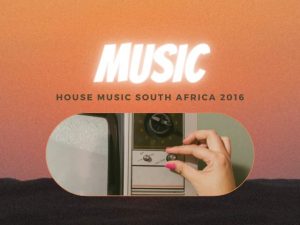 House Music South Africa 2016: “There was Jack in the beginning… Jack boldly exclaimed ‘Let there be house’ one day while brutally throwing down on his box, and house music was born.”

From tribal house to techno, deep house, and afro-infused house, South Africa has long been a hotbed for house music.

Over the years, the genre has helped to fill dance floors and leave a lasting impression on the minds of innumerable house music fans around the country.

Here are ten of the finest house tracks ever made and released by South African performers.

DJ Mbuso wears a lot of hats. He’s the co-founder of Soul Candi Records and Phezulu Records, and via his compilations, he’s brought many a song to South African dance floors. He’s also an accomplished producer. “Mbuso’s Revenge,” from 2005’s Soul Candi Session 2, includes racing percussion, a deep bass line, and a meandering string part, making it both a thoughtful house track and a must-have for the club floor.

Black Coffee has made a name for himself as a modest jazzman in South Africa. His sound has always been a mix of house and jazz. But nowhere was this more poignantly stated than on “Wathula Nje,” a song that featured the late Victor Ntoni. This song is vintage Black Coffee, with its rubbery bass line, gentle percussion, and jazzy piano melodies. He went on to record a live version of the song with a 24-piece orchestra later.

“Tembisa Funk,” which was released in 2007 and appeared on Oskido’s Church Grooves 6 compilation, has stuttering brass hits and strong reverb, making the tune both scary and enticing. The version on Oskido’s album was a little more polished—with a few tweaks here and there—but the original version is still available online.

The unassuming combo of twin brothers George and Joseph Mothiba, who have been crafting afro-infused, tribal house long before it became the rage, would be missing from any list of greats. Tabane’s onomatopoeic singing is featured over racing drums and an addictive flute and guitar melody in their remix of Phillip Tabane’s song of the same name, “Vhavenda.” Despite the fact that Revolution would be the last to acknowledge it, this song is still considered a South African house classic.

Culoe De Song couldn’t have picked a better first impression than “100 Zulu Warriors.” The tune, which had hissing strings and xylophone tapping, introduced the globe to Culoe’s type of tribal house and led to Black Coffee discovering him. Although a cover of the song appeared on Black Coffee’s 2007 album Have Another One, the original remains a timeless classic.

In South Africa’s house scene, DJ Fresh is a name that requires little to no introduction. You simply have to listen to his Fresh House Flava and Definition of House series to see why he’s regarded as one of the scene’s most influential builders. He teamed up with local producer Kellex for “Stay Real,” and went behind the decks for a tune that could easily fill any dance floor today. Over a slow-moving chord part, the chorus of the song says, “You are who you are, don’t change.” Finally, the song is about retaining one’s sense of self in the face of all the nonsense people hurl at you.