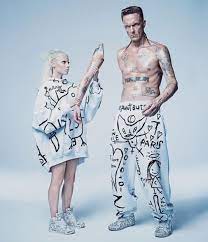 Die Antwoord, an electronic hiphop duo from Cape Town, South Africa, made Internet history with their video smash “Enter the Ninja.” Die Antwoord is a South African hiphop group that formed in 2008 in Cape Town. Rappers Watkin Tudor alias Ninja Jones and Anri aka Yolandi Visser du Toit, a male/female team, and creators make up the gathering. You will learn more as you continue reading.

For a long time, the team had been a part of the South African hiphop scene, and they were also involved in film projects such as The Original Evergreen, MaxNormal.TV, and The Constructus Corporation.

Their debut album $O$ relates to their prior work, specifically Good Morning South Africa. In the album, various tracks were picked from, or are precise of tunes on Good Morning South Africa, for example, the “Rap Rave Megamix” (where the primary looks at Jones’ Ninja character was seen) were later changed into the “Zef Side” video, highlighting a couple of lyrics from “Beat Boy”.

Antwoord visited with other writers and pundits as often as he could, particularly in the United States, to see if their innovative output was merely a joke. “Ninja is, how might I say, similar to Superman and also Clark Kent,” Ninja said when asked whether he was playing a character. The main difference is that I don’t wear this dreadful Superman costume.” They describe their work as “narrative fiction” and “misrepresented understanding,” according to Ninja.

From their career in acting, rapping, writing songs, and producing music, Yolandi and Ninja have amassed riches. The duo has a band whose worth is estimated at $5 million. Ninja net worth is approximately $10 million while Yolandi also has a net worth of $10 million as well.

In 2008, Die Antwoord released their debut album. Their name means “the answer” in Afrikaans. Their first project, $O$, was released to the public and made available on their personal and official websites. “Wie Maak die Jol Vol,” a track from the album, features Cape Flats rappers Garlic Brown (Knoffel Bruin), Isaac Mutant, Scallywag, and Jaak Paarl.

During the early years of his career, they came through with a good song which he called “Wat Pomp?”. The song was nice and highlighted another good South African music entertainer who goes by the name J. Parow.

The South Africans also then debuted another music named “Doos Dronk” together with Fokofpolisiekar. The album artwork was created by photographer named Clayton James Cubitt.

11 years back, South African cinematographer by name Rob Malpage together with co-director Ninja made the video for their hit single “Enter the Ninja”.

Then there are bits of Smile in the song. Butterfly, dk’s music, is most known for making its debut in the TV show Dance Dance Revolution.

Leon Botha, a Cape Town singer and DJ, was featured in the video. It attracted millions of internet views nine months after its publication, and it was featured on a number of high-profile websites, including BoingBoing. As a result, they decided to move their website to a US-based hosting business to accommodate the increased traffic.

Stay with us on fakazaduo for more biography updates.